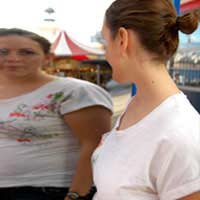 It is not only young women who suffer from eating disorders; men and women of all ages are affected.

Anorexia nervosa is a serious disorder which can become life-threatening. It occurs when a person refuses to maintain a healthy body weight. Other symptoms of this disorder include a distorted body image, an intense fear of gaining weight, and amenorrhea. Anorexics will starve themselves, some of them will engage in binging and purging cycles. Serious medical complications such as starvation, chronic weight loss and death can result. Studies show that anorexics harbour negative feelings about their bodies that are morbid and irrational.

Bulimia nervosa is a disorder which totally disrupts sufferers' eating patterns. A person with bulimia nervosa has an abnormal relationship to food which means that they can no longer eat regular meals but go through cycles of binging and the purging. Bulimics with often have a food binge than after will panic about the quantity of food they have eaten and will want to rid themselves of it. Typically they will do this by using laxative or making themselves vomit, or sometimes a combination of the two. Other bulimics may have a period of fasting after a binge, instead of inducing vomiting.

Eating disorders can cause other serious medical problems these include:

How to Detox Safely