Home > Body Care > Cellulite & How to Get Rid of It

Cellulite & How to Get Rid of It 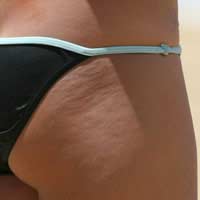 Orange peel syndrome, cottage cheese skin: there are lots of names for the unsightly dimpled skin that affects lots of women, but what exactly is cellulite, and how do you get rid of it?

Cellulite is used to describe the dimpling and puckering of the skin on the thighs, bottom and upper arms of most women once they've gone through puberty. Women's fat cells aren't as closely connected as men's, which is one reason why men don't seem to suffer from cellulite to the same extent as women. Lack of exercise can mean that these connecting fibres close in on the fat, which leads to the dimpled skin that we associate with cellulite.

You don't need to be overweight to have cellulite - even skinny celebs have been photographed on the beach with cellulite. Men are generally unlikely to suffer from cellulite (unless they have very low levels of the androgen male hormone) as it seems to be a predominantly female complaint.

Hormones play a big role in the causes of cellulite, especially oestrogen, which is believed to encourage the formation of new cellulite and make existing cellulite worse. There are other hormones that can play a part in the formation and development of cellulite. These include insulin and thyroid hormones, meaning that those who have hypoglycaemia (too much insulin) and thyroid disorders are likely to have more cellulite than those who don't.

Other contributing factors include diet and general lifestyle. A diet that is high in fat, carbohydrates and salt can lead to increased amounts of cellulite, as can eating too little fibre. Smoking, not getting enough exercise, tight clothing, high heels and even staying in the same position for a significant time period can also encourage cellulite.

Getting Rid of Cellulite

Most women with cellulite are understandably desperate to get rid of it. Unfortunately there's no miracle cure, but there are several things you can do to make existing cellulite less noticeable and discourage new cellulite from appearing. Thankfully, these don't need to be expensive or time-consuming!

Stock Up on Healthy Fruit and Veg

Following a healthy diet that contains lots of leafy green vegetables and fruit is advised. Green vegetables and fruits like berries contain antioxidants, which can help to break down the free radicals caused by alcohol and fried foods. They can also strengthen the skin's connective tissues, which can reduce the amount of fat that can reach the top surface of the skin. Recommended fruits include apples, strawberries, blackberries, blueberries, cherries, cranberries, cantaloupe melon, grapes, kiwis, grapefruit, mango, oranges, pineapple and raspberries. Recommended vegetables include carrots, cabbage, artichokes, cucumber, fennel, leeks, onion, salad leaves, spinach and tomatoes.

Improving the circulation of your skin can help to break down the cellulite. Exercise can improve your general blood flow and circulation, and works best if combined with body brushing or massaging. Doing this on affected areas encourages the growth of new skin cells. Blasting your problem areas with cold water at the end of a bath or shower has a similar effect.

There are countless 'miracle creams' on the market which promise to get rid of cellulite and reduce the circumference of your thighs into the bargain. Do these actually work?Yes and no, as experts suggest that areas affected by cellulite can respond well to being massaged frequently (which the creams suggest that you do), but there isn't any overwhelming evidence that these creams are worth the expensive price tag. Massaging basic body lotion into the affected areas that have exactly the same effect and cost a fraction of the price.

These tips can't guarantee the complete removal of cellulite, as it is often hereditary. However, a combination of diet and lifestyle can play a big role and improving them can discourage the development of new cellulite.